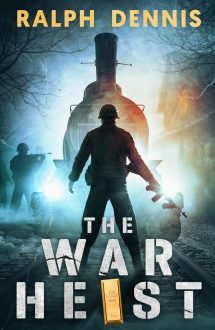 The War Heist by Ralph Dennis

It’s June 1940. War is raging in Europe. France is about to collapse to the Nazis. England is bracing for a devastating German invasion…and the fall of the British empire. In desperation, Winston Churchill sends the kingdom’s wealth in gold bullion and securities to Canada for safekeeping. The first of these top secret shipments, traveling by sea to North America and then by train to Montreal, is worth over $500 million. A group of American soldiers are plotting to steal it… and only one man, a lowly agent for the Bank of England, stands in their way.

A substantially different version of this book was previously published under the title “MacTaggart’s War.”


Reviews For The War Heist

Jack Higgins, author of The Eagle Has Landed

A first-rate novel of suspense.

The action highballs along.