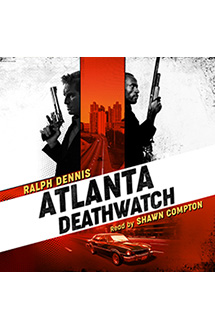 Jim Hardman was a mediocre Atlanta cop until he was wrongly accused of corruption and thrown off the force. Now he works as an unlicensed PI, trouble-shooter and bodyguard…often partnered with his drinking buddy Hump Evans, a black, ex-NFL player who supports his playboy lifestyle by working as hired muscle. Hardman is hired by The Man, a black mobster, to investigate the murder of his white girlfriend, a college student. It’s a case that plunges Hardman and Evans into the center of a violent street war that stretches from Atlanta’s seedy back alleys to the marbled corridors of power.

Ralph Dennis and his Hardman series are finally getting the respect many readers and collectors feel they deserve It doesn’t take long before readers discover that Hardman is not your typical PI. He is not that good looking; a bit on the pudgy side in fact. His methods are unorthodox, and he often plays both sides of the law when working a case. But these and several other genre-defying characteristics are what captures and holds our fascination with Hardman.

In the 1970s, Dennis wrote a dozen hardboiled action thrillers with the titles and general appearance of the paperback hero series then trying to match the success of Donald Pendleton’s The Executioner. Like the exploits of The Butcher, The Death Merchant, The Penetrator, and poor old Nick Carter, dragged from the early pulps with the new sobriquet “Killmaster,” the Hardman books were mass-marketed as men’s adventure yarns. At face value, the leading characters seemed to enforce that impression. Jim Hardman is an unlicensed PI, embittered by his unjust dismissal from the Atlanta Police Department while his “associate,” Hump Evans, is a powerful black ex-NFL defensive end with bad knees who does most of the heavy lifting. So what led Joe Lansdale, in his Atlanta Deathwatch introduction, to compare Dennis to Chandler and Hammett in his effort “to do something different with what was thought of as throwaway literature,” or the late Ed Gorman to call Dennis “the most-beloved obscure private eye writer who ever lived”? Well, Hardman is too human to be your standard hero. Balding and slightly overweight, he’s not terribly likeable. He does dumb things and he’ll bend the law if the price is right. Hump is shrewder than Hardman, as well as being cool and sardonic. More than that, the author’s style is lean and mean, with punchy descriptions and sharp-edged dialogue used in lieu of proselytism to convey the politics and racial intolerance of 1970s Atlanta. In Deathwatch, book one in the series, Hardman is hired by a power-broker to get a fix on his Georgia Tech co-ed daughter’s activities. The investigation leads, surprisingly, to a black mob boss and assorted other crooks and connivers, all well-drawn and well-enacted by reader Shawn Compton, whose southern accent is effectively subtle and whose use of Ebonics subdued. He seems to understand, like Lansdale and Gorman, that Dennis knew what he was doing, and he performs the material with appropriate fidelity to the text. The results should go far in calling attention to a crime writer whose work has been criminally undervalued