Home » Books » Dust in the Heart 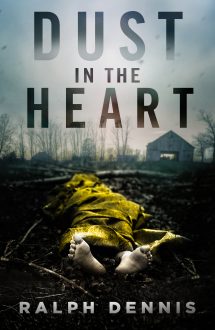 Dust in the Heart by Ralph Dennis

There’s a killer stalking children in a small, North Carolina town…and the only one who can stop him is the local Sheriff, a man crippled physically and emotionally by a war that he’s still fighting within himself. The haunting, powerful new thriller by Ralph Dennis, author of the legendary Hardman series of crime novels

Wilton Drake’s hip was shattered by a sniper’s bullet in Lebanon…and his heart was ripped apart by the wife who left him as lay in a military hospital. Now, after fiteen years in the Navy, he’s returned to Edgefield, North Carolina a broken man, looking for a way to hold himself together. He finds it in a bottle…and behind a badge as Webster County’s newly elected Sheriff…but his forbidden attraction to a mysterious stripper and his harrowing investigation into a horrific string of child murders might destroy what’s left of him, body and soul.


Reviews For Dust in the Heart

Webster County, N.C., sheriff Wilton Drake, the hero of this solid, previously unpublished crime novel from Dennis (1931–1988), has faced a lot in his life. A sniper’s bullet left him with a shattered hip and a limp, while his ex-wife left him with a battered heart, a taste for booze, and an attraction to the wrong kind of woman. Despite his injuries, Drake is all lawman. His latest case finds a child murderer loose in his jurisdiction, and he’ll use everything in his power to bring the killer to justice. This is old school police fiction at its best, where the men talk tough: “ ‘An eye for an eye, Sheriff?’ ‘Whenever possible,’ Wilt said.” In lesser hands, this kind of hard-boiled style would fall into cliché or stereotype, but Dennis, with a sharp ear for dialogue, skilled plotting, and the ability to create fully developed characters, keeps the story fresh and the action believable. Any fan of Ross Macdonald or Ed McBain will thoroughly enjoy this outing.

“Dust in the Heart” is an effective, smart police procedural starring a purposefully flawed hero. While certain genre tropes are familiar, the author's ominous prose is masterful. “Dust in the Heart” proves that even small-town America can be the most threatening. It's this cold, sinister approach that makes Ralph Dennis' final pen-stroke his most enduring legacy.