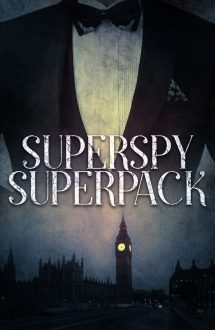 TOUCHFEATHER, TOUCHFEATHER TOO, THE SPY KILLER and FOREIGN EXCHANGE by Jimmy Sangster
THE WINDCHIME LEGACY by A.W. Mykel

It’s 1970. Katy Touchfeather is a fun-loving, British spy with a cheeky attitude and lethal skills…and working undercover as a stewardess for an international airline. In TOUCHFEATHER, Katy is assigned to track down a scientist suspected of selling secrets to the Russians. In TOUCHFEATHER, TOO, Katy’s assignment is to bring down what appears to be a gold smuggling operation…but it’s something far worse and much deadlier.

Ex-British spy John Smith is nearly broke, has bad teeth, is lousy in bed, and drinks too much. But he’s no fool. He’s a man who knows his own limitations and works within them. He blackmailed his way out of the secret service years ago and is barely making a living as a London private eye when, in THE SPY KILLER, his ex-wife comes calling and asks him to follow her philandering husband. But that sleazy, all-too-common job leads to some uncommon trouble…and Smith is thrown like a chunk of raw meat into a lion’s den of international espionage, betrayal, and killing. In FOREIGN EXCHANGE, he is content barely scraping by as a private eye again. But then his manipulative and totally untrustworthy ex-spy master offers him a lucrative payday to participate in high-risk operation on the other side of the Iron Curtain…or face involuntary commitment to an insane asylum if he refuses.

“A tight and often violent tale of intrigue. Spy fiction fans will revel in this dark, witty story.” Publishers Weekly

America has a secret: our espionage operations are run by Sentinel, an intelligent super computer that communicates with spies through an implant in their brains that massively expands their intellectual capabilities. But the power comes with a price. The implants are also explosives that Sentinel can ignite at its whim. Now one of Sentinel’s creators is defecting to Russia with plans to create a red Sentinel twin and must be stopped. Superspy Justin Chaple is assigned to the mission, pitting him against the KGB’s top assassins and, as a shocking conspiracy is revealed, the all-knowing, explosive killer hiding in his own skull.

“A smashing tale! This cleverly plotted and twisting first novel compares to the best of Robert Ludlum.” Publishers Weekly