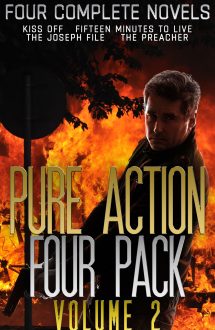 THE KISS OFF by Jim Cirni

Carl’s first love returns and rekindles their sexually-charged romance. There’s just one problem. She died three weeks ago. Is she an imposter? A ghost? Or is the answer even more chilling? A brilliant thriller from a multiple Emmy-Award winning writer & New York Times bestselling author.

THE PREACHER by Ted Thackrey Jr.

A mysterious, one-eyed stranger wanders into Farewell, New Mexico, a dusty border town rife with corruption. He’s known only as The Preacher, an ex-Priest, ex-Special Forces commando, and now a professional gambler who has given up on his own salvation … but is determined to find justice for a murdered Vietnam vet… even if it means taking on the entire, God forsaken town.

THE JOSEPH FILE by Alfred Harris

"A gritty, insistent voice grabs the reader from the first sentence in this superior suspense novel. The action never lets up in this fast-paced thriller."

"Phoef Sutton has a wonderful and unique voice. This is a romantic tale, full of suspense and human emotion. It's also funny in its own special way. Once I started it, I couldn't stop,"

" Thackrey deals all the right cards in a fast-paced, streetwise story "

"A superior thriller from start to finish. The conclusion is hair-raising."