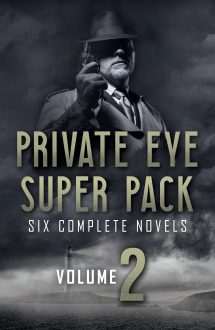 Snowball by Jimmy Sangster
James Reed is an ex-Scotland Yard detective who became the bodyguard, then lover, then husband, then ex-husband of Hollywood superstar Katherine Long. Now he’s a self-styled beach bum, living in the Malibu beachhouse he got in the divorce settlement, and making a half-assed effort at screenwriting. But then Katherine comes back into his life — and asks him to save her daughter, who is embroiled in a $2 million scheme involving stolen drugs, high-powered studio execs, and ruthless mob killers.

A Witness Above by Andy Straka (Frank Pavlicek #1)
Ex-NYPD Detective Frank Pavlicek now works as a private investigator and hunts with a trained falcon. While hunting, he discovers the corpse of a black, teenage drug dealer with ties to his daughter.

“Pavlicek is a breath of fresh air in the field of private eye fiction.” Jeffery Deaver

Low End of Nowhere by Michael Stone (Streeter #1)
Bounty hunter/PI Streeter is hired by the scheming woman he nailed for insurance fraud to go after her dead boyfriend’s stash of drug money… and has to single-handedly face off against a greedy, violent pack of lowlifes and sociopaths killing their way to the big score.

The Charleston Knife is Back in Town by Ralph Dennis (Hardman #2)
Ex-cop Jim Hardman is hired to find five kids who’ve ripped off a high-stakes gambling party, recover the loot, and save them from being butchered by a hitman from Charleston with a very sharp knife.

“Exceptional characterization, strong and vigorous prose, and a glimpse into a place and timethat has long since disappeared.” Mystery Scene Magazine

The Missing and the Dead by Jack Lynch (Bragg #2)
PI Peter Bragg is pitted against a brilliant serial killer obsessed with the expressions of death on his victim’s faces. This novel was an Edgar Award Finalist, the Oscar of Mystery writing, given by the Mystery Writers of America.

Sleeping Dog by Dick Lochte
A New York Times Book of the Year, A Nero Wolfe Award Winner, an Edgar Award Finalist, A Shamus Award Finalist and an Anthony Award Finalist. Leo Bloodworth, a hard-drinking, middle-aged Los Angeles PI with hypertension and a low tolerance for precious teenagers, teams up with Serendipity Dahlquist, a bright and strong-willed roller-blading 14-year-old searching for her lost dog. But things quickly escalate, plunging the oddest of odd couples into the dark underworld of sunny Southern California and pitting them against one of the biggest, and most brutal, organized crime families in Mexico.