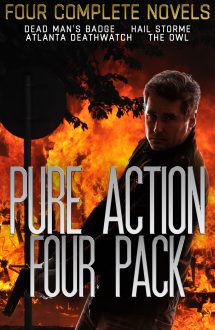 It’s Atlanta, 1974. Ex-cop Jim Hardman works as an unlicensed PI, trouble-shooter and bodyguard…often partnered with his drinking buddy Hump Evans, a black, ex-NFL player who supports his playboy lifestyle by working as hired muscle.
Hardman is hired by The Man, the “Black Godfather,” to investigate the murder of his white girlfriend, a college student. It’s a case that plunges Hardman and Hump into the center of a violent street war that stretches from Atlanta’s seedy back alleys to the marbled corridors of power.

“It’s terrific. It’s lean and smart and very good. I say, check it out.” Joe Lansdale

Career criminal Longview Moody, on the run from killers, assumes his dead, twin brother’s identity as the new Chief of Police of a Texas town that’s being terrorized by a Mexican drug cartel.

Vietnam vet and former pro football player Wyatt Storme is bow-hunting in Missouri when he stumbles upon a hidden field of marijuana…and unravels a deadly conspiracy of corruption, drug-trafficking and organized crime… and making himself someone that just about everybody wants dead.

“Here’s one for the boys who like to kick butt. Fighting the good fight has seldom been so much fun!” Kirkus Reviews

The most daring and original hero in crime fiction… in a debut novel that’s a relentless, pure-adrenaline rush. It’s the mid-1980s. Crime in Los Angeles is running rampant. When the law can’t help you, there is one man who can: Alexander L’Hiboux, whose ability to sleep was destroyed in the ghastly tragedy that cost him his family. Now he’s justice-for-hire, prowling the streets and solving crimes with deadly finality.

“Mike Hammer is a wimp compared to The Owl,” Bill Crider, author of Outrage at Blanco and the bestselling Sheriff Dan Rhoades mysteries