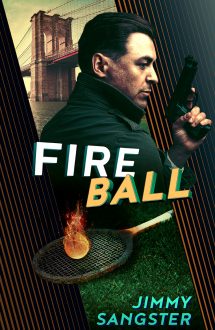 Ex-cop James Reed is a self-styled beach bum, living in the Malibu house he scored in the divorce settlement from his brief marriage to a famous actress. Life should be easy…but he has terrible luck. His first date with a woman he meets on a tennis court goes very, very bad, getting him beaten, accused of murder, and pursued by killers. And that’s just in one night. Now he’s trapped in nightmare of sex, blackmail and murder…and to get out, he must go to New York…and worm his way into the rotten core of the Big Apple.

Smoothly entertaining. Wry,
oblique humor is the big appeal here. A mark is "caught with his hormones down." A thug, unimpressed with Reed, observes, "Some tough guy you're turning out to be." Old-school fare for committed old-schoolers.

Raymond Chandler fans will welcome this posthumous gift from Sangster.

Read a couple of these James Reed novels and author Jimmy Sangster could get to be a habit.

This is a fast-moving, funny, sexy -- very sexy -- story. James Reed is a very charming character.