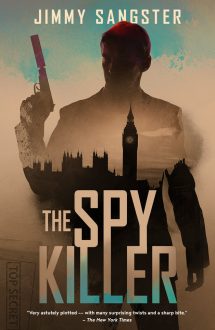 The Spy Killer by Jimmy Sangster

Ex-British spy John Smith is nearly broke, has bad teeth, is lousy in bed, and drinks too much. But he’s no fool. He’s a man who knows his own limitations and works within them. He blackmailed his way out of the secret service years ago and is barely making a living as a London private eye when his ex-wife comes calling and asks him to follow her philandering husband. But that sleazy, all-too-common job leads to some uncommon trouble…and Smith is thrown like a chunk of raw meat into a lion’s den of international espionage, betrayal, and killing. His only hope of surviving is to outwit his clever and brutal adversaries at their own deadly game.

This novel was originally published under the title private I and was adapted into a feature film starring Robert Horton, Jill St. John and Sebastian Cabot.


Reviews For The Spy Killer

Very astutely plotted -- with many surprising twists and a sharp bite.

A witty spy story in the anti-James Bond tradition.

There's nothing ordinary about this adventure. It's big league intrigue.

Sangster has fashioned a tight and often violent tale of intrigue that raises questions about the morality of espionage. But his real triumph is Smith, a kind of anti–James Bond: not suave, not physically resourceful, and “not very good in bed.” But he is very clever and very funny. Spy fiction fans with a taste for nostalgia will revel in this dark, witty story.