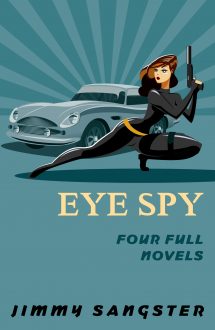 Ex-British spy John Smith is nearly broke, has bad teeth, is lousy in bed, and drinks too much. But he’s no fool…and underestimating him would be a fatal mistake. He blackmailed his way out of the secret service years ago and is barely making a living as a London private eye when his ex-wife comes calling and asks him to follow her philandering husband. But that all-too-common job leads to him a deadly web of international espionage, betrayal, and killing.

Ex-British spy John Smith blackmailed his way out of the secret service years ago and is content barely scraping by as a private eye. But then his manipulative and totally untrustworthy ex-spy master offers him a lucrative payday to participate in high-risk operation on the other side of the Iron Curtain…or face involuntary commitment to an insane asylum if he refuses.

“With sexy foreplay & an intriguing plot, FOREIGN EXCHANGE is one of the best kept secrets of the spy genre.” Paperback Warrior

It’s 1970. Katy Touchfeather is a fun-loving, British spy with a cheeky attitude and lethal skills…and working undercover as a stewardess for an international airline. Katy is assigned to track down a scientist suspected of selling secrets to the Russians. It’s a high-stakes, global escapade that could cost Katy her life.

“Bubbly, irrepressible… drawn by her breezy, chatty first-person narrative, readers will cheer Katy on as she skates around with flamboyant grace.” Publishers Weekly

“Sangster’s novel may seem like a satire to the uninitiated. But it only takes a few opening pages to realize that it is a genuine spy novel – with a unique, and noticeably unusual female perspective. TOUCHFEATHER presents an entertaining and refreshingly different take on the male-dominated world of spy fiction.” Bookgasm

Katy’s assignment is to bring down what appears to be a gold smuggling operation…but it’sssomething far worse and much deadlier.