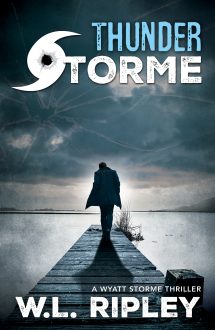 With a boom of thunder and lightning, Wyatt Storme is back again, as electric and glowing with energy as W.L. Ripley always makes him.

Ripley once again delivers sustained suspense, a corkscrew plot, and a plethora of evil-doers, in a perfectly executed thriller.

WL Ripley is a fantastic storyteller, and THUNDER STORME proves the point. And Ripley does it with a style reminiscent of the derring-do of the classic Travis McGee novels: smart, sassy, hilarious--and deadly. Wyatt Storme is that one-in-a-million tough guy with a brain, part philosopher, part enforcer, always on the right side of justice. Storme and Chick Easton may be the best duo since Riggs and Murtaugh--maybe since Butch and Sundance. With relentless action and crackling dialogue, THUNDER STORME comes at you full-force."

Phillip Thompson, author of OUTSIDE THE LAW

Ripley ably juggles humor and violence. Those looking for a testosterone-saturated romp will be satisfied.

If Travis McGee and Jack Reacher had a love-child it would be Wyatt Storme. Fasten your seat belt and get ready for the kind of wild ride that only W. L. Ripley can deliver!

This entertainingly breezy thriller will have you laughing more than crying. Thunder Storme is a riff on the contemporary rural noir... stylishly written pulp fiction with a twisty plot. A riot of a read.