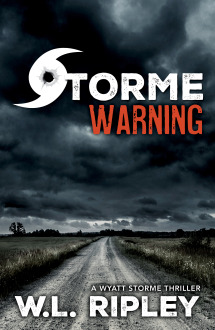 The new, fourth novel featuring Wyatt Storme, the ex-football player turned troubleshooter that critics are hailing as the long-awaited heir to Travis McGee and Spenser

Vietnam vet and former Dallas Cowboys player Wyatt Storme just wants to be left alone in his remote Ozarks cabin – but violence and trouble have a knack for finding him. And when it does, he doesn’t back down. This time, Chick Easton, a hard-drinking, shockingly lethal ex-CIA agent, asks his buddy Storme for back-up when he’s hired by the director of a big budget western to protect a bad-boy movie star who is getting well-deserved death threats. There’s also an annoying catch: the director wants to shoot the star’s new western on Storme’s land.  Storme reluctantly agrees to it all, unaware that a sociopathic mob enforcer that he once put in traction, and in prison, is on his way and gunning for revenge.

Coming in 2015 … the Brash Books re-release of the first three books in the series: Hail Storme, Storme Front, and Eye of the Storme

Here's one for the boys who love to kick butt….Storme has the catlike moves of the early Spenser, before he got to be such a prig

Wyatt Storme and his more dangerous sidekick, screw-loose ex-CIA operative Chick Easton, are not only engaging and supremely resourceful, but guaranteed to bring a smile to your face,

Storme tries to lead a quiet, solitary life but is something of a magnet for trouble and violence. Bad luck for Strome, but very fortunate for fans of well-crafted crime fiction...The main attraction to this series has always been Storme’s insightful first-person narration. This, along with the intensely personal code that directs his life but still allows for an abundance of compassion, has earned Ripley’s protagonist comparisons to John D. MacDonald’s Travis McGee and Spenser of the early mystery novels of Robert B. Parker. Both elements are in full-force in this latest work and lend the story a satisfying richness rarely experienced in contemporary crime fiction.

In the tough-guy-­protagonist-and-tougher-sidekick subgenre, Wyatt and Chick deserve billing just below Parker’s Spenser and Hawk and Crais’ Elvis Cole and Joe Pike.

There’s plenty of action as the story unfolds, but the best part of the book lies in watching the by-play between Wyatt and Chick, particularly when they’re confronting someone who’s attempting to give them grief. It’s somewhat reminiscent of the banter between Spenser and Hawk in Robert B. Parker’s novels, and it’s a lot of fun to watch. All in all, this is one Storme warning you won’t mind getting at all.

The narrative is speedy and twisty, the snappy patter is always amusing, and the conclusion is satisfactory. If you like being reminded a bit of Spenser or Travis McGee, you'll get a real kick out of this one and the other books in the series. Check 'em out

Wyatt is tough, and his ex-CIA buddy Chick may be even tougher. Wyatt is reminiscent of Robert B. Parker’s Spenser, but his cooking isn’t as adventurous. For a person whose style makes laid-back seem like caffeine high, he has a penchant for ultra-violence, yet it comes off as justifiable.

Storme is a really cool guy, a real John Wayne kind of guy. Tall, honest, kind to women and a bit of a loner. Great, old-fashioned PI writing and a MUST for fans of Spenser, Elvis Cole...
one of my favorite books of the year so far.