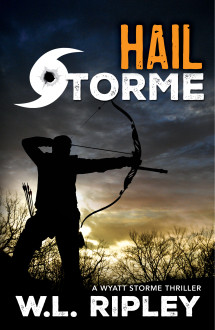 Vietnam vet and former pro football player Wyatt Storme is bow-hunting in Missouri when he stumbles upon a hidden field of marijuana…and is attacked by a vicious dog and shot at by a sniper. He reports the violent incident confidentially to the local Sheriff…who is murdered the next day. Storme believes there’s a connection and starts asking questions, unraveling a deadly conspiracy of corruption, drug-trafficking and organized crime… and making himself someone that just about everybody wants dead.

Originally published under the title Dreamsicle

As much joyful bashing as it is "Red Harvest" on uppers, though completely innocent of Hammett's dark vision. Fighting the good fight has seldom been so much atavistic fun

Great fun. Damn fine writing. Jack Reacher with a bow and arrow. Prose beautiful and forceful. Like a clean punch to the jaw.

A lively adventure and an undeniable treat

An impressive entry in the genre...Ripley knits it all together with page-turning finesse