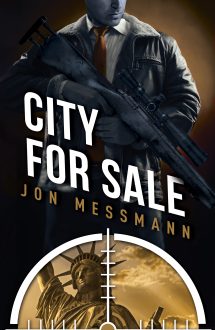 City for Sale by Jon Messmann

The fifth heart-racing adventure in the Revenger series, back in print for the first time in nearly fifty years.
Ben Martin is in New York, where his blood-soaked saga of pain and retribution tragically began, and where Johnny Lupo, a psychopathic Mafia boss, orders the murder of a judge and the massacre of the people in his courtroom. It’s part of Lupo’s insane, brutal plan to take control of the city. But Martin isn’t going to let that happen. Because his battle against the mob is no longer about revenge — it’s about justice and accepting the man that he has become.


Reviews For City for Sale

The Revenger series is a clear standout. Take note of Messmann’s special treatment of Martin’s psyche. With an uncanny awareness, Messmann delves into Martin’s warrior soul and deciphers dark emotions. In many ways, Martin could be the most complex vigilante in the genre.

If you want a little philosophy with your blood and guts, The Revenger is for you. The finale is probably one of the best in the series