Home » Books » A Promise For Death 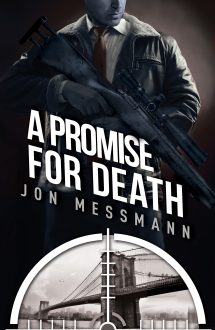 A Promise For Death by Jon Messmann

The explosive sixth and final novel in the classic Revenger series…back in print for the first time in nearly fifty years.
The Don of the New York underworld, embroiled in a mob war and worried about the safety of his family, offers Ben Martin the inside information he needs to take out all of the rival crime families in the city. In return, the Don vows to quit the mob, leaving the city virtually free of organized crime, granting Martin his long-sought, and seemingly impossible, victory in his one-man war against the Mafia. Martin knows he’s making a deal with the Devil. In the end, when the Don is the only mobster left standing, unopposed and more powerful than ever, will he really walk away? Or will he have Martin killed instead? It’s a deadly risk Martin is willing to take for the chance to truly end his very personal war…and leave the bloodshed behind.
This new edition includes an Afterword by Joe Kenney, founder of the Glorious Trash blog.
“Messmann delivers not only a fantastic novel but also a fitting series conclusion, paying off on elements that were introduced back in the first book. It’s an incredibly entertaining and well-written thriller.” Glorious Trash


Reviews For A Promise For Death