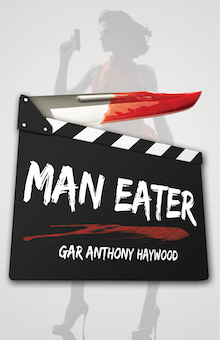 Cutthroat film development executive Ronnie Deal (“smart, single, and beautiful — ‘heartbreak in a tall, dark hourglass,’ somebody had once called her”) is sitting in an L.A. bar one day, nursing her anger at a rival for fouling up her “breakout film,” when a “physically intimidating” black guy suddenly commences to wail on a “young, frail blonde woman” nearby. Reacting viscerally, her adrenaline poisoned by rage at her own manifest misfortunes, Ronnie shocks even herself by battering the thug unconscious with a beer bottle. Only later, when that same goon — freelance enforcer Neon Polk — subdues and rapes her in her own townhouse, then demands that she pay him $50,000 to leave her alone, does Ronnie realize the horror she’s invited into her life. And all because she’d impulsively defended a “career streetwalker” named Denise “Antsy” Carruth, from whom Polk was trying to retrieve $25,000 that had been stolen from drug dealer Bobby Funderburk. (Man Eater is nothing if not a gold mine of memorable appellations.) Now, determined to feel safe again from attack, and protect her reputation in the bargain, Ronnie decides that Neon’s lights have to be put out. Permanently.

To advance this plan, she decides to enlist the aforementioned Langford, an ex-con who did time for manslaughter and is now out on parole, trying to peddle an action-filled film script titled Street Iron. Ronnie figures to make “the most twisted screenplay-option ever conceived”: offer to purchase Langford’s work in exchange for him telling her how to whack Neon. But nothing goes smoothly in this tightly framed, sardonically humorous thriller. Langford initially resists Ronnie’s double-edged deal (he doesn’t want to go back to prison and lose contact again with his young daughter), though he ultimately agrees to help. Meanwhile, the gorgeous Ms. Deal’s weaselish colleague, Andy Gleason, is prowling for information he can use to destroy her, once and for all; a couple of deranged, drug-peddling brothers, Jaime and Jorge Ayala, have escaped their hospital beds and are gunning for Langford, who’d beaten them up during a dispute involving cold pizza; and Ronnie’s ex-husband is wheeling west from Colorado with a special passenger, intending to check up on her recent success. As these plots and subplots intertwine, often in unlikely ways that owe debts to Elmore Leonard and Carl Hiaasen, Gar Anthony Haywood delivers a standalone yarn that is as fast-paced as it is frothing with satirical commentary about the shark-infested suites of Tinseltown.

Man Eater shares its lightheartedness with Haywood’s Loudermilk novels (Bad News Travels Fast, 1995) and its more hard-boiled edge with his stories about L.A. private eye Aaron Gunner (All the Lucky Ones Are Dead, 1999), yet it’s unlike either series. The gorgeous, white Ronnie “Raw” Deal is a sharp-elbowed survivor with a determinedly concealed past and a wit that could flay layers from stone. (“I’ll tell you what’s ridiculous,” she says to Andy Gleason early in this story. “The fact that you were born without a tail, and can pass by a cheese tray at parties without eating everything on it.”) Her relationship with African-American Langford is slow to ignite, but there’s satisfaction in seeing these two find common cause. And a late scene in which the Ayala brothers — one more comically infirm than the other — threaten the two main characters is a guaranteed curative to anyone’s foul mood. Regrettably, several of this story’s actors never achieve much depth, and the subplot about Ronnie’s ex provides little more than a banal opportunity for 11th-hour poignancy. Such faults can be forgiven, though, in a novel as vital and entertainingly vicious as this one.

J. Kingston Pierce is a longtime Seattle journalist and editor of the crime-fiction blog The Rap Sheet, which has won the Spinetingler Award and been nominated for an Anthony Award. He also writes the book-design blog Killer Covers and serves as the senior editor of January Magazine. Pierce is the author of more than half a dozen non-fiction books, including San Francisco: Yesterday & Today (2009), Eccentric Seattle (2003) and America’s Historic Trails with Tom Bodett (1997). 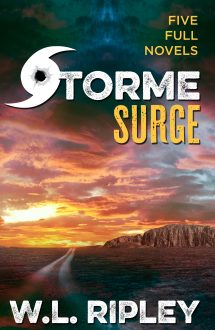