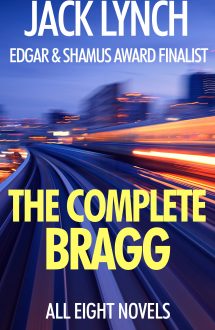 The Complete Bragg: All Eight Novels by Jack Lynch

ONE: Private investigator Peter Bragg learns that The Dead Never Forget when he’s hired by a retired mobster to find out who is threatening his eleven-year-old daughter.

TWO: Bragg’s relentless search for The Missing and the Dead pits him against a brilliant serial killer obsessed with the expressions of death on his victim’s faces. This novel was an Edgar Award Finalist, the Oscar of Mystery writing, given by the Mystery Writers of America.

THREE: Bragg becomes the hunter and the hunted as killers descend on the city to find thirty-two Pieces of Death — gem-encrusted chess pieces smuggled out of China that are worth a staggering fortune. This novel was a Shamus Award Finalist, the Oscars of PI writing, given by the Private Eye Writers of America.

FOUR: Real estate developers are fighing over every precious inch of bay view land, and it’s up to Bragg to make sure the locals don’t Wake Up and Die as the campaign of terror, arson and murder escalates

FIVE: A prison riot turns deadly and the convicts, holding hostages, demand that Bragg Speak For The Dead and clear the ringleader’s teenage brother of a murder charge in a small, northern California town. This novel was a Shamus Award finalist.

SIX: An old lover of Bragg’s is accused of murder. Now Bragg must find the Truth or Die.

SEVEN: Bragg returns to his hometown of Seattle, to help an old friend targeted for death, and discovers the hard way that Yesterday is Dead when he’s forced to confront his past.

EIGHT: A psychic Peter Bragg once saved from suicide has seen her future… death at the hands of a serial killer… and turns to Bragg to save her life again…and, if necesssary, to Die For Me .


Reviews For The Complete Bragg: All Eight Novels

The Complete Bragg: All Eight Novels 5.0