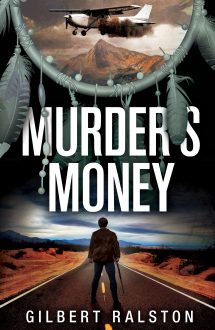 The twist-filled fourth novel in the Dakota series.

Years ago, Jack Bray was involved in a car accident that left his brother Henry, a certified genius, in a wheelchair for life. Being crippled doesn’t stop Henry from becoming immensely wealthy off the patents for his inventions and, in a bit of eccentricity, paying his debts with ancient gold coins. He’s never stopped believing that his brother still wants to kill him…and that Jack will succeed unless Henry kills him first. So, when Jack is shot-to-death in his office, Henry is arrested for the crime…and hires Dakota to clear his name. That’s only the beginning. Soon more bodies drop, and Dakota finds himself following a bloody trail left by a dead man…right into the center of a shocking conspiracy.

“Murder's Money” is the fourth series entry, and it's probably the best and most epic of the books.