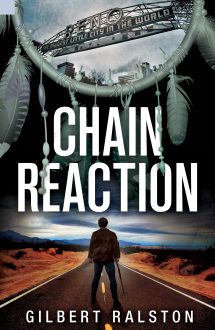 The fifth, and final book in the incredible Dakota saga comes full circle, linking the events and characters from the previous adventures into one epic and unforgettable story…and yet it also stands alone as a thrilling, relentlessly compelling crime novel.

Native American dockworker Aaron Costarella and his wife are brutally murdered…and Dakota is hired by their daughter to find out why. His quest takes Dakota from Nevada to Arizona and California, pits him against a multitude of killers and cops, and reveals some surprising, and deadly, connections to people from his own violent past…and the bizarre link they all share to three rare, ceremonial daggers. It’s non-stop action and bloodshed until the shocking, and utterly satisfying, conclusion.

I want to be buried with these five novels. They are just that damn good. This 'Dakota' series is absolutely a mandatory read. The amazing aspect of this series is that the five books really make up one long case file. It puts you, the reader, in the dangerous (and coveted) spot of being the scene sleuth piecing it all together.