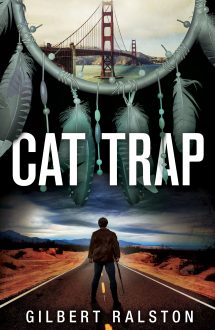 The third book in the hard-charging Dakota series.

Two healthy, seemingly unrelated men die of heart attacks in Lake Tahoe. There’s little doubt that their deaths were unnatural. Dakota is separately hired by a casino, and an old friend he served with in Vietnam, to find out what happened to the two men. He soon discovers they were killed with a rare poison by Guy Marten, a ruthless assassin who supposedly burned to death in a house fire years ago. Marten worshipped Bastet, the ancient Egyptian cat goddess, and modeled his life, and his murders, on her example. Now, it seems Marten is back from the dead with a kill list…and Dakota, and everyone he loves, is on it. Dakota’s hunt takes him from coast-to-coast, through a raging snowstorm, and climaxes in a bloody, intense battle in the Sierras, where he is out-numbered, out-gunned, and out-of-luck.

The intriguing part of this series is that each novel is married to its predecessor with the same supporting cast. It's like a brutal version of Cheers - where everybody knows your name and who shot you.