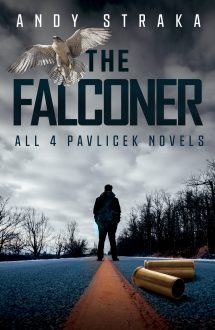 The Falconer: All 4 Pavlicek Novels by Andy Straka

What’s the PI series that Edgar Winners Michael Connelly. Jeffery Deaver, Steve Hamilton and Rick Riordan read when they want the best? This one. Here are all four Frank Pavlicek adventures in one volume.

Thirteen years ago, NYPD Detective, Frank Pavlicek quit the force after a controversial shoot-out that left an unarmed African-American teenager dead. The divorced father of a teenage daughter, Pavlicek now works as a private investigator and hunts with a trained falcon.

A WITNESS ABOVE
While hunting, Pavlicek discovers the corpse of a black, teenage drug dealer with ties to his daughter. Unable to ignore the connections to his family or the shooting that cost his career, he goes after the killer to find the truth, save his daughter …and free himself from the shackles of his past.

A KILLING SKY
The Anthony Award-nominated second novel in the Frank Pavlicek series. Pavlicek is hired by the daughter of a philandering Virginia Congressman to find her missing twin sister. Is her disappearance related to her disintegrating relationship with her boyfriend? Or is it somehow connected to her ambitious father’s re-election campaign, a tawdry sex scandal, and a hit-and-run accident that happened twenty years ago? Pavlicek’s investigation unearths long-buried secrets that someone would like to keep six feet under…along with the PI’s corpse.

A COLD QUARRY
An expert falconer is shot in the back in the wilds of West Virginia. The police believe he was the victim of a hunting accident but PI Frank Pavlicek, a falconer himself, isn’t buying the story. Beatings, bombings, warnings from the FBI, and the arrest of his best friend on trumped-up charges only strengthen Pavlicek’s resolve to follow a bloody trail of lies and corpses that leads to a chilling, terrorist conspiracy.

A NIGHT FALCONER
The tenants of a Manhattan apartment in a heated dispute with their landlord believe he’s using a bird-of-prey to hunt down their cats and drive them out of the building. Pavlicek investigates the bizarre case as a favor for his friend, another ex-cop-turned-PI. But he soon discovers that there’s more at stake than cats and condos, pitting him against a sadistic street gang and a killer prowling Central Park with a great horned owl.


Reviews For The Falconer: All 4 Pavlicek Novels