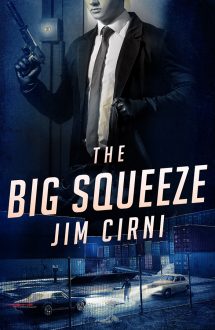 The Big Squeeze by Jim Cirni

Dip Dippolito, a low-level thug, is in the wrong place at the right time, and takes a bullet meant for Jimmy Montello, the teenaged son of mob boss Tony Montello. Grateful, Tony puts Dip on the fast-track to becoming a made man by assigning him to help wayward Jimmy focus on graduating high school instead of running his own little numbers racket. The promotion doesn’t wow Dip’s girlfriend, who’d like him to go straight, and he soon finds himself smack in the middle of a bloody mob war that someone wants to pin on him. Dip is in a big squeeze that could end with his eyes shot out.

Reviews For The Big Squeeze

Cirni hauls out all of his shiniest toys for this gangland adventure.

For those who prefer the hardboiled genre, The Big Squeeze is a sleek, shapely model with a deep stain of irony.

Cirni does grainy dialogue, fast, funny and he doesn't get cute.

Fast-paced, streetwise, and sharp as a garrote.