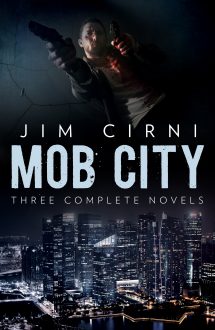 THE KISS OFF
Ex-accountant Frank Fontana is the bartender at the mob-owned Skyview Lounge near LaGuardia airport. He secretly witnesses the murder of his boss, who has left behind a ledger of drug deals that could put a lot of people in jail. Now Frank is caught between the cops, hitmen, and his sexually voracious, scheming wife, who wants to use the ledger to extort a fortune from the Godfather, a homicidal chocolate addict. If Frank isn’t very, very careful, he’ll get a fatal kiss off.

“A gritty, insistent voice grabs the reader from the first sentence in this superior suspense novel. The action never lets up in this fast-paced thriller.” Publishers Weekly

THE COME ON
Frank Fontana runs a Queens supper club that is neutral ground for mob families. Everything is good for Frank…until things get too good. He wins big at craps in Atlantic City, then wins even bigger in a private poker game, before he realizes that the games are rigged and he’s a patsy in a gambling swindle that’s put him in the middle of a underworld war…

“Fontana’s restaurant maintains a certain sleazy charm, and their spicy dialogue is as tasty as the calamari.” The New York TImes

THE BIG SQUEEZE
Dip Dippolito, a low-level thug, is in the wrong place at the right time, and takes a bullet meant for Jimmy Montello, the teenaged son of mob boss Tony Montello. Grateful, Tony puts Dip on the fast-track to becoming a made man by assigning him to help wayward Jimmy focus on graduating high school instead of running his own little numbers racket. The promotion doesn’t wow Dip’s girlfriend, who’d like him to go straight, and he soon finds himself smack in the middle of a bloody mob war that someone wants to pin on him. Dip is in a big squeeze that could end with his eyes shot out.

“Cirni hauls out all of his shiniest toys for this gangland adventure.” New York Times

“For those who prefer the hardboiled genre, The Big Squeeze is a sleek, shapely model with a deep stain of irony.” The Washington Post

“Cirni does grainy dialogue, fast, funny and he doesn’t get cute, sticking to a style with a great sense of illuminated cliche, displaying a craft in which everything is nailed down.” The Guardian