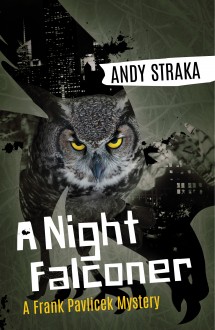 A Night Falconer by Andy Straka

The tenants of a Manhattan apartment in a heated dispute with their landlord believe he’s using a bird-of-prey to hunt down their cats and drive them out of the building. Virginia PI Frank Pavlicek, an ex-NYPD cop and an avid falconer himself, investigates the bizarre case as a favor for his friend, another ex-cop-turned-PI. But he soon discovers that there’s more at stake than cats and condos, pitting him against a sadistic street gang and a killer prowling Central Park with a great horned owl.


Reviews For A Night Falconer

The plot is fast-paced, witty and complex

Straka’s storytelling is as strong as talons, and once he’s got you in his grip, he never let’s go