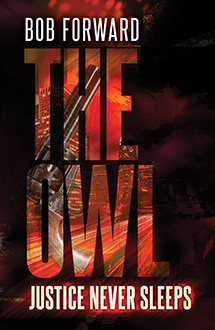 The Owl books were a lot of fun to write. The concept of a private detective who didn’t sleep spawned itself almost naturally from my lifestyle at the time.

I was young enough (and dumb enough) so that I would routinely stay awake for three nights in a row. I’m sure you’ve been there. You start by pulling an all-nighter for some test or work deadline. Then you stay up a second night celebrating the successful completion of aforementioned test or deadline. At which point, you are running on fumes and probably not making the best decisions. So you decide to stay up a third night just to see if you can do it.

Somewhere in there (probably during one of those third nights) I created a character who never slept at all. I realized such a character would have a lot of advantages, especially in a climate such as Los Angeles. Every day I’d read about some fugitive from justice apprehended while hiding in a hotel or a relative’s home. They were always caught staying somewhere. They had to – they had to sleep.

But a man who didn’t sleep wouldn’t need to stop. He could sit down to rest, but he’d always be on guard. He wouldn’t have to go unconscious for a third of his life. He could do things. Exciting things.

The 1980s (in which The Owl novels take place) were a time of great transition. We didn’t realize it at the time, but the world was on the cusp of some major changes. Computers had been invented, but they were feeble things for the most part. The Internet was still ARPANET, and out of reach for most people. No one had a phone in their pocket, much less a computer. And while closed-circuit cameras were in use, they still required a human to sit and watch them. Video recording was too expensive for most purposes. Research took time, and involved digging through paper records. And if you wanted to call anyone – first you had to find a phone.

In such a world, even someone as notorious as the Owl could operate freely, as long as he stayed moving – and ruthless.

As for making him a detective – at the time I was working as an editor for a textbook publishing company. One of their hard-and-fast rules was that no sentence could be over twenty words long. Their little Vector word processing machines would flag any sentence violating this rule. You’d either have to change it or break it into two shorter sentences. It was annoying at first, but I soon realized it made for a terse, crisp writing style. A style that was perfect for hardboiled detective fiction. I was already a fan of authors such as Raymond Chandler and Ross MacDonald. So making the Owl an updated L.A. gumshoe was an easy choice. 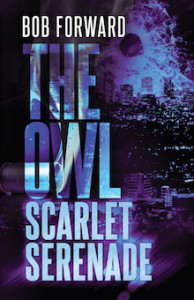 But I also had to make him likable. And that was the tightrope walk. The Owl scatters bodies around like bullet casings. Finding a way to make such a character appealing took effort, but I like to think I managed it. To start with, he’s got a code of honor. He pretends he doesn’t, but he does. And more importantly, he’s got a self-deprecating sense of humor. The Owl knows he’s not as tough and cool as everyone thinks he is. But for the purpose of keeping his enemies on edge, he’s got to maintain the image. So he’ll go to a lot of work to seem tougher than he is, to seem cooler than he is. He’s a dark hero, but he’s also, first and foremost, a human being. He’s got a small edge, but it’s not a superpower. He just plays it for all it’s worth. And sometimes, it’s worth a laugh at his own expense.

The Owl really started me on my writing career, though I admit I quickly skidded sideways into screenplays. New family, bills to pay, and a single animation script paid as well as a novel. With the advantage of my being able to write it inside a week. Sure. I succumbed to the lure.

But The Owl never faded. The character and concept were optioned by Hollywood almost immediately. True, their attempts to turn it into a movie franchise have met with the usual Hollywood rigmarole. But it remains under option to this day, shifting from studio to studio as new executives discover it.

And I have to say, I’ve never been prouder of anything I’ve done. Screenplays go through endless changes commanded by other people. But a novel is — for better or for worse — all your own work.

So I’m grateful as hell to Brash Books for letting me bring The Owl out of the shadows once more. 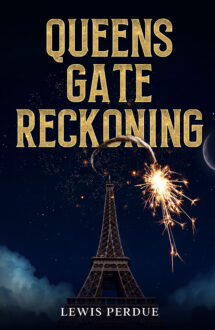