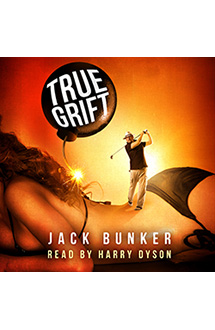 “This caper novel is a fun, fast read, kind of like Elmore Leonard meets Donald Westlake, or the Golf Channel hosting a season of Better Call Saul.” Publishers Weekly STARRED Review for the Novel

“Dyson reports on the action with a rich, almost comforting voice flexible enough to underline Edwards’s sarcastic, mean-spirited criticisms of his team while simultaneously exposing him for the arrogant bully he is. Dyson keeps it light and smart for much of the book, but has no problem turning tough when the game is almost done and blood is spilled.” Publishers Weekly STARRED Review for the Audiobook

A bankrupt lawyer and a greedy insurance adjuster concoct a personal injury scam involving a runaway grocery cart and recruit a half-wit golf course greenskeeper as their fall guy. But the plan goes horribly wrong, and as it spirals into a murderous fiasco, the grifters must deal with betrayals, shakedowns, bombs and mobsters to avoid prison… or worse, an early grave in a Southern California landfill.

Jack Bunker’s debut crime novel is the study of a surefire insurance scam that goes horribly and hilariously wrong. Reader Dyson reports on the action with a rich, almost comforting voice flexible enough to underline Edwards’s sarcastic, mean-spirited criticisms of his team while simultaneously exposing him for the arrogant bully he is. Dyson keeps it light and smart for much of the book, but has no problem turning tough when the game is almost done and blood is spilled.

TRUE GRIFT is a breezy page-turner that’s fun-filled and loaded with laughs from the jump. Donald Westlake fans will love this one.

A fast and funny chronicle of a seemingly simple scheme to scam an insurance company...it's participants would be at home in any of Donald Westlake's Dortmunder novels. Harry Dyson, who presents the novel at an effectively breezy pace, slows down only near the end when payment for the crimes comes due with results that are as satisfactory as they are surprisingly moral.

If crime paid, they say, it would attract smarter criminals. Jack Bunker's TRUE GRIFT is a rollicking misadventure that might deter anyone who's ever thought about making a quick buck off an insurance company. This first novel is perfect for fans of Elmore Leonard, Carl Hiaasen and Donald E. Westlake — which is to say, all smart readers.

"True Grift" is a funny, fast-paced, ever-surprising hoot that belongs beside the finest schmoes-on-the-loose novels of Elmore Leonard.

First-time author Jack Bunker displays an effortless, vivid writing style reminiscent of Elmore Leonard with the satirical spin of Carl Hiaasen. It’s hard to believe this is his first book. The dialogue is brisk, quick and witty, the situations outrageous but nonetheless believable, and the plotting air tight. The scam-gone-awry with murderous consequences may be hell for the shyster, but ‘True Grift’ is heaven for the readers.

TRUE GRIFT – as the title indicates – is a comedic romp through a scam gone wrong. Along the way Bunker impressively avoids most of the pitfalls of first time authors. There are unmistakable echoes of Carl Hiaasen in this debut work, along with liberal doses of Elmore Leonard and Donald E. Westlake. Like these established masters Bunker knows how much fun it is to watch the best laid plans of desperate, dishonest people go wrong while taking the reader along for the ride. If TRUE GRIFT is any indication, Jack Bunker is on his way to a successful second career in crime fiction, and readers can look forward to more humorously entertaining stories from this new and impressively talented author.