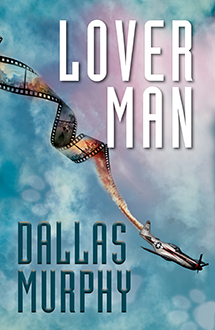 Artie Deemer lives off his dog Jellyroll, the most famous canine in the country, star of movies, TV, and dog-food advertising.  Artie hangs around the apartment, smoking a little pot, listening to jazz, trying to keep the world away.  But then his ex-lover, Billie Burke, is murdered and he receives a note from her:  “I’m dead, darling.  Get out of your chair and look in the ice tray.”  And so begins the wild, unpredictable ride.  Artie becomes a reluctant sleuth, dodging hoods, blackmailers, killers, and crazy combat pilots as he struggles to uncover Billie’s murderer—without joining her in the morgue.

Lover Man is a first novel of unusual skill. It combines a potpourri of elements—the murder, World War II ace fighter pilots, missing persons, organized crime, and a good deal of humor, satire…and even a bit of farce. The writing is flip and sophisticated

Lover Man is a bouncy, quirky, funny mystery with racy dialog. The story line makes more twists and turns than a New York cabdriver running up the meter

Artie Deemer is definitely an original….One of the most appealing new mystery-series heroes to debut in some time….Let’s hope it won’t be long before Artie takes to the streets again

Clever, intriguing, shocking, touching and funny, this first novel from Dallas Murphy inaugurates what should be an outstanding series. Murphy writes with clarity and power; the prison and morgue are shockingly good. His characters are fascinating and unique….One of the year’s best

In a genre of gimmicky heroes, Arthur Deemer is a true original….The frantic, antic humor…carries along characterization and narration like twin runaway locomotives….Murphy moves his novel along scene by vivid scene….Most of these scenes are achingly funny—but some are shocking, for Murphy is very good at setting up, then blindsiding his reader….I’m looking forward to the next Artie Deemer novel

I thoroughly enjoyed Dallas Murphy’s Lover Man. It is a splendidly professional production, with plenty of action and shocks to keep the adrenaline running, lots of sharp humor to ease the tension, characters who are fascinating and believable, and a plot as twisty as a politician’s promises. Hard to believe it’s a debut!

Reginald Hill, author of the Dalziel and Pascoe mystery series