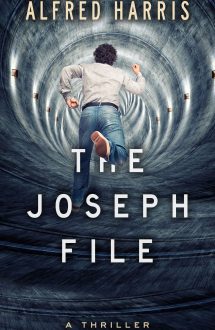 The Joseph File by Alfred Harris

A breakneak thriller that roars to a shocking twist ending that will leave you shaking.

David Campbell is on a cross-country railroad trip when his train stops briefly late one night at a snowy, deserted station in Kansas. He steps off to make a quick call and glimpses two men carrying a covered body on a stretcher from the train to a waiting car. For an instant, the sheet slips from the corpse and he recognizes the lifeless face of John W. Joseph, the reclusive billionaire industrialist. So later he’s baffled when he repeatedly sees Joseph in the media, very much alive. Soon Campbell is barely cheating death in one terrifying “accident” after another and his only hope of survival is to discover the truth before his luck runs out.

Reviews For The Joseph File

An unstoppable story that thickens and quickens from page to page. You will catch your breath and go right on holding it.

From page one, the book never relaxes its grip on you.

The ending is the best I've read in a long time