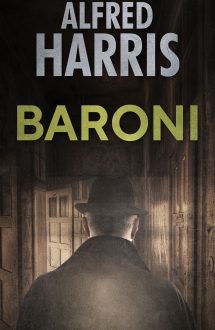 Rumpled, ploddingly brilliant LAPD homicide detective Lou Baroni is a widower hoping to get promoted to sergeant before his looming retirement. But Baroni’s hopes are constantly thwarted by his venal, unappreciative boss and sabotaged by his ambitious young partner. They want Baroni to spend his final days investigating a recent murder that could lead to the headline-making arrest of an underworld kingpin. The problem is, Baroni is obsessed with the apparent, accidental death of a woman who fell five stories from her apartment window. Baroni is convinced that her henpecked, but likeable husband pushed her…and he’s willing to risk his badge, and his meager pension, to prove it.

The book was adapted into the French film Pile Ou Face, starring Philippe Noiret, often referred to as “the French Walter Matthau,” as Baroni.

What starts as a familiar police procedural takes some unexpected turns. Along the way Harris has fun toying with many of the troupes of crime fiction. This, along with many instances of unexpected humor, distinguishes the novel from other procedurals. we can be grateful to meet, get to know and follow Lew Baroni thanks to the reappearance of this novel. Both long-time crime fiction fans and newcomers will find it a welcome addition to their reading list.

What starts out as a seemingly ordinary police procedural, with a touch of 'Columbo' thrown in, turns out to be a delightfully clever, surprisingly heartwarming twist on all of the genre's tropes. Harris delivers everything you'd expect from a crime story and so much more, leading to a surprise ending that will leave you smiling. I absolutely loved it.

Baroni moves with confidence, avoids cliche, and is neatly plotted. You will like this one.

A clever, compelling mystery that will keep the reader absorbed to the end.

The police novel doesn't have to be an exercise in violence, brutality and bloodletting. Alfred Harris proves this with BARONI. An exceptional story.

You will be glad to retire with him.

All of the upside-down attitudes make for a new flavor in the police story.