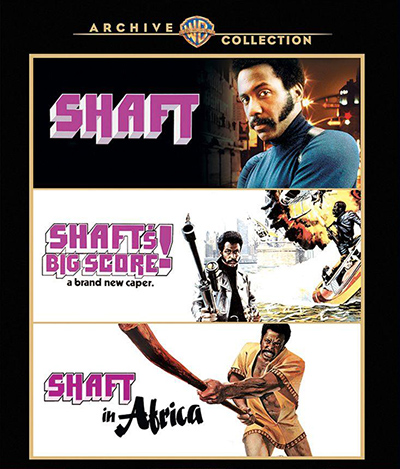 I bought Ernest Tidyman’s novel Shaft in 1970 at Iowa Book & Supply in Iowa City, on my way to class at the University of Iowa. I bought the first edition hardcover primarily because its black private eye hero was described in the jacket copy as making “Mike Hammer look like a sissy.”

When the film Shaft came out in 1971, Barb and I were there. We were perhaps unlikely fans of blaxploitation movies (then in their earliest stages), but we went to scads of the things, from Cotton Comes to Harlem to Coffy, from Slaughter to Super Fly.

For us, Shaft topped them all, due to the perfect marriage of the opening Isaac Hayes theme, Richard Roundtree’s charismatic performance, and Gordon Parks’ gritty, location-heavy direction. The follow-up, Shaft’s Big Score, wasn’t as good, but the finale was incredible, with John Shaft chased through an industrial landscape by a swooping helicopter. For some reason, the third entry, Shaft in Africa, didn’t make it to many theaters, and we didn’t see it until home video years later; but it turned out to be the best of the three. Unsung hero of the series was producer and Africa screenwriter Stirling Silliphant, the genius behind TV’s Route 66 and Naked City.

Shaft came to TV in one of those rotating anthology “wheels” (like the one that included Columbo and McCloud), but after seven TV movies the series was cancelled, though ratings had been good. The show got a lot of criticism for lacking the grit of the films, but looking at them years later, they seem pretty good (and I liked them at the time), with Roundtree great and the Hayes theme in play. They are available from Warner Archives as a boxed DVD set.

Warner Archives also just released Shaft’s Big Score and Shaft in Africa on blu-ray for the first time (the original Shaft has been available on blu-ray for several years), both as individual discs and in a three-disc set of all three features. I had long hoped for this kind of blu-ray release and it doesn’t disappoint. I have not revisited the 2000 Shaft with Samuel Jackson as the nephew of the original, played again by Roundtree. I will get around to seeing it again, but remember finding it just passable.

Now there’s a fifth Shaft film, and guess what? The critics hate it, according to Rotten Tomatoes. Seems the elder two Shafts (a young Millennial Shaft is the actual protagonist) strike them as politically incorrect, gun-loving louts, misogynist and violent. But the audience reviews are overwhelmingly positive.

There’s a reason audiences responded so favorably – it’s a terrific picture. I was in that joyous state I so seldom find myself in, these days, in movie theaters: I was a pig in shit. A lot of advance (pre-anybody seeing it) criticism has been thrown at the new Shaft on Facebook and elsewhere, for being a comedy and for not using the iconic Isaac Hayes theme. On Facebook, the question was posed indignantly: What kind of Shaft movie doesn’t have the Isaac Hayes theme? Many Facebook experts agreed that all real Shaft movies have that theme.

Of course, someone – I believe it was me – weighed in to point out that Shaft’s Big Score and Shaft in Africa, two of the original three films, also didn’t have the Hayes theme. Now that I’ve seen the new Shaft, I realize the theme is used a lot – just minus the Isaac Hayes vocal. But the wah-wah pedal-driven theme is used beautifully, when real Shaft-like stuff kicks in, like Jackson walking down a ghetto street, gun in hand, ready to kick drug dealer ass.

I pity the fools (as someone once said) who cannot enjoy this knowingly politically incorrect salute to the original film and its cinematic era. Roundtree doesn’t enter till act three, but he does so with a bang – a number of them. He’s wonderful.

But so is Jackson, much better than he’s been lately in some of his projects, spurred on this time by good material. Jessie Usher is winning as John Shaft, Jr., and the generational interplay between him and Jackson is funny and even at times touching. Director/co-screenwriter Tim Story does a fine job with both his actors and his action scenes.

As for this being a comedy, no – it’s a crime flick with comedy, not even tongue-in-cheek, although it does have an awareness of its absurdity. A scene in an Uber while Jackson tries to explain the film’s convoluted plot to Usher, getting interrupted by a chatty driver, is amusing proof of that. So is Roundtree’s throwaway reference to being called Jackson’s uncle, not father, in the 2000 Shaft.

The original novels by French Connection creator Ernest Tidyman are an odd but worthwhile bunch. Tidyman wrote the first three – Shaft, Shaft Among the Jews and Shaft’s Big Score – while the remaining books employed ghosts who worked from Tidyman’s outlines, with Tidyman apparently doing final drafts.

In my view, Tidyman screwed up Shaft’s potential as a long-running series character by utilizing two different ghosts and not doing all (or anyway most of) the work himself. The final book, in which he rather rudely and unnecessarily kills Shaft off, The Last Shaft, appeared only in England and remains difficult to find. Took me years, and I had begun to think the similarly titled, Goodbye, Mr. Shaft, was the same book.

Author David Walker has picked up the series in both prose and graphic novel from, doing so with respect and skill.

By all means, if you liked the Richard Roundtree Shaft, ignore the idiotic, easily offended critics and have a good time with this funny, exciting tribute to blacksploitation of yore. 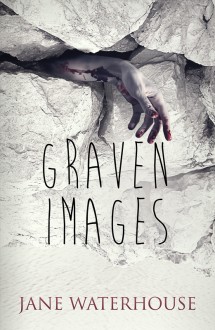 The body parts of murder victims are turning up in the lifelike sculptures of a celebrated artist...a case that strikes horrificly close to home for true crime author Garner Quinn.