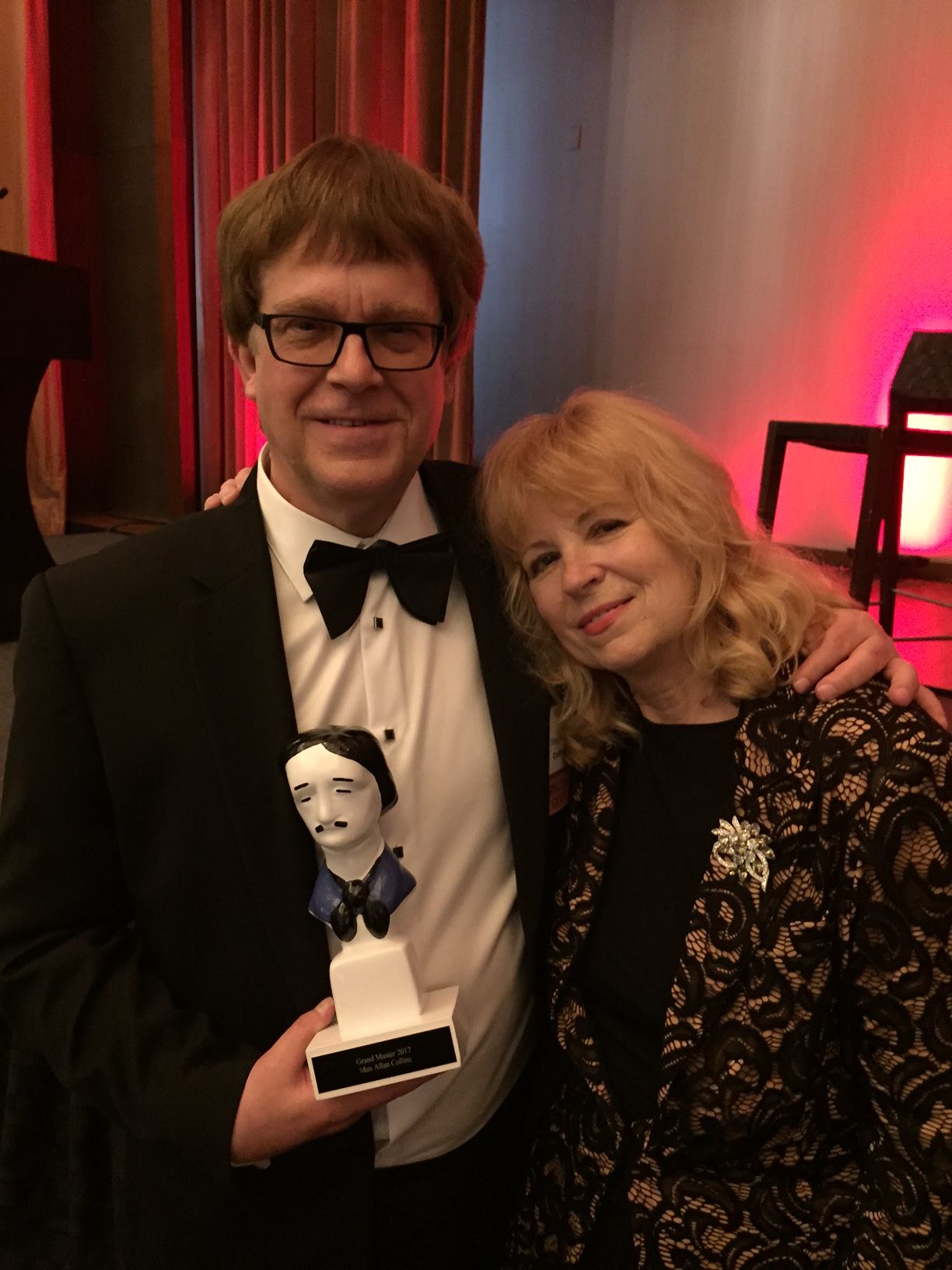 According to Otto Penzler, the Grand Master Speaketh too long, actually, in accepting his “Edgar” at the banquet last Thursday at the Grand Hyatt Hotel in New York. I told Otto that maybe I should have dropped the thank you that I gave him for publishing the Mike Hammer short story collection recently.

The banquet found me dressed in my James Bond Halloween costume. I was in great company – not only my wife Barb, but my agent Dominick Abel, Barbara Allan’s editor Michaela Hamilton (whose guests we were), Lee Goldberg and Joel Goldman of Brash Books, and Charles Ardai of Hard Case Crime, among others. We had ringside seats, and were right there to helplessly watch M.C. Jeffrey Deaver, MWA president, drop to the stage floor in a dead faint, apparently caused by dehydration. We’re told he’s doing fine, but it was a suspenseful half hour we all could have done without. The EMT and police response was incredibly quick, by the way – something like five minutes.

I went on fairly deep into the night, after a nice video that showed off both my work and that of the year’s other Grand Master, Ellen Hart. As anyone who’s ever heard me speak probably would guess, I never prepare – I just have a vague idea of what I want to say, and go. In this instance, however, I prepared a list of people I wanted to thank, mostly editors and publishers. But when I got up there, I found myself blinded by bright lights, at a podium not lighted at all. I could barely make out anything on my sheet of paper with the thank you’s.

So I forgot some people (Otto I remembered). Who, you ask? How about the MWA itself, and the organizer of the event (and heart and soul of the organization), Margery Flax. I did give Barb a nice shout-out, and my agent Dominick Abel, but I forgot Brash Books altogether, though they had generously bought an ad in the program book and provided free copies to attendees of the uncut Road to Perdition prose novel.

I did manage to talk about the three key mentors of my early professional career – two of whom were MWA Grand Masters themselves, Donald E. Westlake and Mickey Spillane. I mentioned that Don had given his blessing when Bait Money sold, and generated sequels, even though they were outrageously imitative of his work. And I shared some writing advice Mickey gave me – “Take your wallet out of your back pocket before you sit down to write.” To which I said to Mickey, “Mick, I’m pretty sure your wallet is fatter than mine.”

Mostly I talked about Richard Yates, the great mainstream writer (pictured below). I’ll share with you the story I told at the Edgars, with a few extra touches, since Otto isn’t handy to berate me.

As I began trying to write fiction, I was well-aware of the Writers Workshop in Iowa City, just 35 miles from my house, and I always assumed I’d go there. Never thought I’d have to do anything but just enroll. The Workshop was (and is) a graduate program, but they had a single undergraduate section of about a dozen junior and senior students. In August 1968, two months or so after Barb and I got married, I was due to start at the U of Iowa as a junior (after two years at Muscatine Community College) and thought I better go up there and submit my manuscript, as I’d learned was required.

Richard Yates was the instructor. I found him in his office where he was straightening things in preparation for the coming semester. A lot of skinny little manuscripts were arrayed on his desk. Short stories. Amateurs! Me, I had a novel tucked under my arm (MOURN THE LIVING).

Yates had a full-face beard and looked like a benevolent version of John Brown, the abolitionist. His eyes were always a little sad and that first day was no exception. I began enthusiastically talking about how I’d been writing mystery and suspense stories, including four novels, since junior high – that my heroes were Dashiell Hammett, Raymond Chandler and James M. Cain…I left out Spillane, knowing he was frowned upon. When I stopped bubbling over like a shaken bottle of pop, Yates took the novel from my hands and regard me with pity.

“I will take a look at this,” he said, “but I hold out no false hope to you. This kind of thing is not what we do here. We are serious writers at the Workshop, writing serious fiction.”

I went home with my tail tucked between my legs, my very dejection a cliche, my world shattered.

A few days later the phone rang. Barb, who’d endured my bleak self-pitying jag, answered, then looked at me with surprise, covering the mouthpiece, and said, “It’s that Richard Yates….”

I took the phone, wondering what abuse waited.

“Mr. Collins,” he said, “I owe you an apology. I’ve read your novel. You’re very serious about what you do, and you’re writing at a professional level above anything else that’s been submitted to me. I would be very pleased to have you in my class.”

Then, after a long pause filled by my stuttering non-response, he said, “You know, my wife and I watch Carol Burnett every week, and we laugh and laugh, and have such a good time. And I was reminded of your novel.”

I could just see the blurb – “In the Tradition of Hammett, Chandler and Carol Burnett!”

“And it occurred to me,” he said, “that there’s no shame in creating entertainment.”

Thereafter Dick Yates was my champion, even in the instances when he wasn’t my instructor, throughout the rest of my years at the Workshop. He worked with me at his home, had Barb and me over for dinner, and he landed me my first agent (Knox Burger).

First ironic postscript: I had to submit all over again to get into the graduate Workshop. But when I went to pick up my submission at the Workshop office, I was told I’d been declined, and the manuscript of Bait Money was handed back to me. By a quirk of fate, my evaluation was accidentally left in the manuscript, showing I’d been rejected by a grad student whose job was to thin the pile. And I was rejected for the same reasons that Yates had once given me before he read my manuscript.

“If the applicant wants to write this kind of thing,” the grad student wrote, “he doesn’t need to go to the Workshop to do it.”

I took this immediately to Yates – Bait Money had been written under his guidance and supervision – and he went to the top guy at the Workshop. The book was given to three instructors (not grad students) and received the highest rating possible. I was in.

We lose people along the way. My producing partner Ken Levin lost his wife Mary recently. My friend Ed Keenan, who Matt Clemens, Ed’s wife Steph and I so often played poker with, died while I was in NYC. At the Edgars, I sat watching an “in memoriam” video, and got blindsided by the smiling faces of Ed Gorman and Miguel Ferrer.

That’s why I write these pieces from time to time. To remind myself, and share with you, some of these wonderful people, who stay with us long after they’re gone. 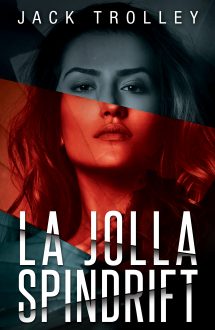