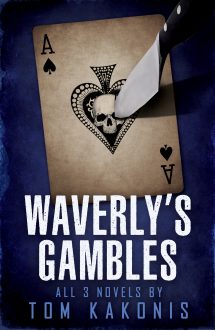 All three of thriller master Tom Kakonis’ wildly acclaimed novels featuring Timothy Waverly, an ex-con and professional poker player as good at playing the hero as he is at playing the odds. Twice honored as ‘one of the top ten crime novelist of the year’ by the New York Times

Waverly travels to Traverse City, Michigan for a break…and falls into bed with a seductress named Midnight. She’s an out-of-towner, too, there to rescue her self-destructive brother, who has stupidly ripped off a fortune in cocaine from a vicious Chicago mobster. Now she is being chased by Shadow, a hemorrhoidal hitman who gleefully specializes in torture and rape, and Gleep, his muscle-bound henchman. The odds are stacked against her, but Waverly is a gambler who knows how to play them…

A mob boss has given professional gambler Timothy Waverly two weeks to make good on a $300,000 debt…or die at the hands of two hit men. Waverly’s only hope is convince a pill-popping, ex-girlfriend and her loser husband to set him up in a series of high-stakes poker games in Palm Beach with rich Arab prince who cheats at cards. But that’s not the only game that’s rigged. Waverly knows he’s going to be killed as soon as he pays his debt…and that somehow he’s got to cheat death in his biggest gamble yet.

“One of the top ten crime novels of the year,” New York Times

Waverly is in Las Vegas now, counting cards at the blackjack tables, trying to scratch together some money without getting caught. Things aren’t going too bad until his naive sister drifts into town and hooks up with a murderous sociopath nicknamed Eggs who wants to muscle in on a basketball point-shaving scheme. Soon people are dying and the only way Waverly can save himself, and his sister, from joining them is to play a game of blackjack-to-the-death…

“The latest and kinkiest…a bravura performance that will make your palms sweat.” New York Times

“Shadow Counter again proves that Tom Kakonis is a master of the low-life novel. Nobody does it better.” Ross Thomas

All three of thriller master Tom Kakonis' wildly acclaimed novels featuring Timothy Waverly, an ex-con and professional poker player as good at playing the hero as he is at playing the odds.


Reviews For Waverly’s Gambles: All 3 Novels

"Kakonis can really write. In Waverly, he gives us a wonderful character in a brutal world."

"One of the ten top crime novels of the year. Kakonis is a sharp new gambler in the literary crap game--he takes the pot."

"A sure narrative voice, a richly shaded hero and heroine, nightmare-vivid villains, and a plot paved with switchbacks and big curves add up to classy, if brutal, crime entertainment: this one cooks."