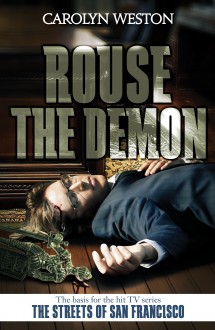 Rouse the Demon by Carolyn Weston

It’s the socially turbulent 1970s. A controversial therapist secretly records his sessions…until he’s brutally murdered. Homicide detectives Al Krug and Casey Kellog discover that key tapes have been erased…recordings that could tie the therapist to the mysterious disappearance of one of his former patients, a psychotic teenage girl who may also have been his lover. But the cops soon realize that the killing is only beginning….and that a dark secret has roused a demon.

Be sure to catch the further adventures of Krug & Kellog in the new, contemporary novel, THE LAST GOOD PLACE by ex-cop Robin Burcell, which brings the characters to present-day San Francisco.


Reviews For Rouse the Demon