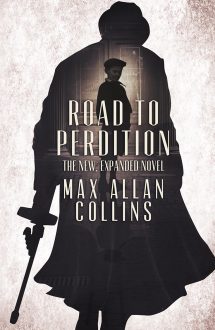 From Max Allan Collins, 2017 Mystery Writers of America Grand Master Honoree for a Lifetime of Excellence in Mystery Writing


Reviews For Road to Perdition

Collins (Quarry in the Black) expands this crime tale set in Depression-era Chicago—originally a graphic novel and later a Sam Mendes–directed film that was itself novelized—into a terrific full-length novel... Collins’s modern classic really shines in this new incarnation.

A richer and more satisfying version of the tale, one that combines the swift pace of the graphic novel with the well-developed father-son relationships of Mendes’ movie — and that includes both additional hard-boiled dialogue and more historical context for the Depression-era story set in Al Capone’s Illinois. And Collins’ writing, always crisp and vividly visual, is at its best here.

This newly published edition of ROAD TO PERDITION is highly recommended to those who first read the 2002 version as well as those reading it for the first time. As good as the original graphic novel was, this restored novelization ranks as one of the finest works in Collins’ long and notable list of novels