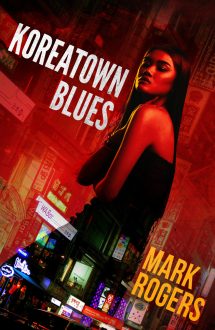 Wes buys a carwash in LA’s Koreatown and gets a young Korean wife he’s never met as part of the bargain. The catch? Her five previous husbands were murdered before the honeymoon. Now Wes has a ring on his finger and a target on his back…and is caught in the middle of a centuries-old blood feud that won’t end until he’s either dead or the last husband standing.

"Koreatown Blues" is a refreshing, lively novel that holds out hope that sometimes, if you're a decent guy, people will help you find original solutions to some very grim problems.

Mark Rogers knows that the stylish, polished picture frame in which we live is riddled with holes, in which worms live.

Mark Rogers delivers a genuinely fresh take on a modern crime novel. It’s fast and witty, with an eye for character and pacing that reads like early Charlie Huston.

Jay Stringer, author of WAYS TO DIE IN GLASGOW

Koreatown Blues is a cleverly-plotted hard-boiled novel with crisp, muscular prose, a feverish pace, a vividly-drawn urban setting, and characters so real that Rudy Giuliani would stop and frisk them.

An Entertaining, fast-paced first novel with an unexpected ending.

A mystery that revitalizes the L.A. noir tradition from the inside out...It’s a page-turner of a pulp told with a literary sensibility and a social conscience.