Home » Books » A Few Days Away 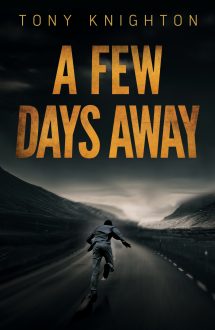 A Few Days Away by Tony Knighton

On Valentine’s Day, a professional thief and his partner robbed a bank in a Central Pennsylvania town. It all went well until they tried to get away. His partner was killed, the money was lost, and the injured thief barely escaped with his life. Now, four months later, he’s going back for his money. But he’s not the only one after it. Corrupt cops, warring street gangs, white nationalists and crooked politicians all agree on one thing – they want him gone. Permanently.

A professional thief steals a state senator's safe full of cash...and then has it stolen from him...and then tears up the city trying to get it back.

A stunning anthology of Philadelphia-set crime stories. In "Happy Hour," the title story, a small-time grifter steals an overcoat on Christmas Eve and finds a pair of gloves, a pack of gum, and forty thousand dollars in the pocket. But his unexpected score soon becomes an icy nightmare.

Reviews For A Few Days Away

He's very good, and he's a genuine Pennsylvanian. Knighton's 'A Few Days Away' is hard-edged and suspenseful, with action that feels real and an anti-hero who can keep all the moving parts in his mind at once.

A must-read for aspiring criminals, who will learn that going straight offers a much simpler life. I was with Knighton’s anti-hero thief all the way, figuring whatever he netted from this caper, he earned it. Taut writing, crisp dialogue, non-stop action. What more could you want?

"A Few Days Away is a tight, taught and tough crime novel where everyone's working an angle and hiding a secret. If you like your crime coming at you hard and fast like I do, Tony Knighton's latest Nameless Thief novel is right up your alley. A fast, gritty read.

'A Few Days Away' is a hard-edged contemporary noir novel with a relentless anti-hero – a thief with no name. It’s a taut, pacy tale referencing Richard Stark’s Parker novels, but with even more icy cynicism. Knighton’s thief and his unswerving, self-declared righteousness will delight pulp fans.