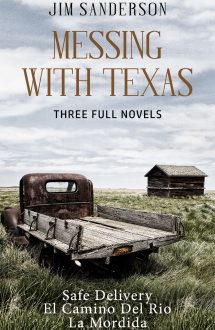 SAFE DELIVERY
Jerri Johnson is a P.I. in San Antonio Texas, tracking down bail jumpers and serving subpoenas, when her old lover Vincent Fuentes is released from prison and tries to draft her into a plot to smuggle guns over the border. Her friend Joe Parr, an aging Texas Ranger haunted by the ghost of his dead wife, tries his best to keep Jerri out of trouble, but he knows it’s a losing proposition…and that this time, it might be a lot more than her heart that gets broken.

EL CAMINO DEL RIO
Circling buzzards lead U.S. Border Patrol agent Dolph Martinez to the corpse of a man executed in the desert…a murder that shatters the fragile calm in a dusty, Texas town. His investigation pits him against the Mexican Army, the DEA, big-money Houston real estate interests, a Catholic nun who practices voodoo, a charismatic revolutionary wanted on both sides of the border, and perhaps deadliest of all, the demons from his own, tortured past.

LA MORDIDA
Dolph Martinez leads a U.S. Border Patrol task force battling crime and corruption in the empty desert borderlands of Texas and Mexico where la mordida, the payoff, is a way of life. He’s a walking embodiment of the violent, cross-cultural clash, his soul torn between the two cultures that make him a very special lawman in an unforgiving place. But now he’s become an unwitting pawn in a dark conspiracy that could end with his corpse among the sunbaked bones of the border dead…

This tale boasts an unusual protagonist, sharp plotting, and a large cast of full-bodied characters. An engaging mystery served with plenty of sociological seasoning

Consistently readable and entertaining. Sanderson is a gifted prose stylist and his descriptions are vivid and evocative

Grit and grace in the face of troubling ambiguities in a moral borderland.

A wonderful and unique mixture of smart crime novel, a classy love story,. and a hard vision of the Southwest. I loved it from beginning to end.