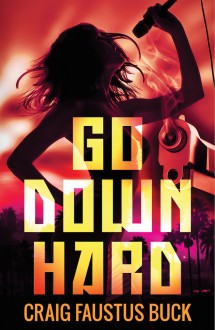 Go Down Hard is a wild, hard-boiled journey through the noir worlds of aging rock-and-rollers, live Internet sex shows, abusive psychiatrists, Slavic mobsters, child molesters, emotional betrayal, deceit, arson, murder and estate planning.Nob Brown is a divorced, disillusioned thirty-something ex-cop turned bottom-feeding tabloid writer. His best friend and occasional lover, Gloria Lopes, is an LAPD detective who needs an Excel spreadsheet to chart her sex life. When Gloria slips Nob the confidential file on the unsolved twenty-year-old murder of a legendary rock-and-roll goddess, Nob hopes to solve the crime and propel himself out of the tabloids and into a lucrative book deal. But he pokes into the wrong holes and unearths rotting secrets that give rise to fresh corpses. As the cold case comes to a fast boil, Nob is forced to battle for his own survival.

The wildly inventive, hard-boiled story of an ex-cop-turned-tabloid reporter who investigates the unsolved, 20-year-old murder of a legendary rock-n-roll Goddess...bringing the cold case to a fast boil.

Reviews For Go Down Hard

one of the finest and most entertaining crime novels of the year... GO DOWN HARD also shows traces of such contemporary masters as Donald E. Westlake and Elmore Leonard – especially in its combination of abrupt, unexpected violence and laugh-out-loud humor. Anyone curious about the state of or characteristics of the contemporary crime novel need look no further than GO DOWN HARD. Let’s hope Craig Faustus Buck doesn’t keep us waiting too long for a follow-up

GO DOWN HARD is a spirited mix of noir homage and hard-boiled spoof, and Craig Faustus Buck gets the proportions just right. Sexy, tough and comic -- and often all three at once. Noir fans with senses of humor will dig it.

Craig Faustus Buck's Go Down Hard is a pleasure. Buck gives us a wisecracking freelance writer, a delectable female cop, detestable bad guys, and a plot with excitement that builds to the end.

It’s a crime-novel dream... there’s suspense and violence here, too, as well as good writing, and, in fact, the many asides are often both delightful and quirky.

Hardbitten and told with a deft hand, Craig Faustus Buck delivers a twisty and engrossing tale that will stay with you long after the last page is finished

A neo-noir carnival ride. Sex, drugs and rock 'n roll and a hero who doesn't always wish to be one make for a fun read. The dialogue will make you smile.

Go Down Hard's noirish prose is smart, smooth and side-splitting.

Mark Pryor, author of THE BOOKSELLER