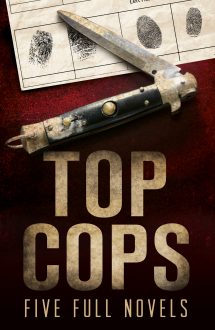 FOR THE DIGNIFIED DEAD by Michael Genelin
A woman’s body is pulled from the frozen Danube in Bratislava. Police Commander Jana Matinova recognizes the killer’s calling card. She had him in her grasp once before …and he slipped away. But not this time.

“One of the more intriguing characters in fictional thrillerdom” Kirkus Reviews

MEMPHIS RIBS by Gerald Duff
It’s May in Memphis, and four bloody murders occur on the eve of the International BBQ Contest and the Cotton Carnival: a conventioneer is stabbed at an ATM machine, a gang leader and his girlfriend are executed, and a wealthy local businessman is killed in his own home while his bodyguard is napping outside the door. It’s up to homicide detective J.W. Ragsdale to solve these seemingly unconnected crimes without scaring away the tourists.

POOR POOR OPHELIA by Carolyn Weston
The basis for the hit TV series The Streets of San Francisco A woman’s corpse is found floating in Santa Monica bay with a law firm’s business card, sealed in plastic, strung around her neck. Detective Al Krug and his new, young partner Casey Kellog have to solve the bizarre and gruesome murder… if they don’t kill each other first.

PLAYING FOR KEEPS by Jane Waterhouse
Young Manhattan professionals with big bank accounts are gentrifying old, waterfront Hoboken for their new homes, forcing the locals out, literally and financially. So when two old women are killed in their apartments, freeing up their real estate, hard-drinking Hoboken detective Hunter Murtaugh, who is being pushed off the police force, refuses to believe the party-line that gang members are to blame. Murtaugh sees a bigger picture. His tenacious investigation could end his career… and his life.

“Murtaugh makes a good, off-beat hero, and the mystery he solves is presented with skill and style,” Boston Globe