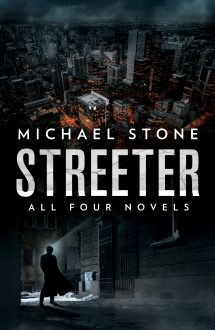 The Complete Streeter: All Four Novels by Michael Stone

“Michael Stone works the hard-boiled genre conventions with the insouciance of an old pro. Streeter is an eye-catcher” – New York Times

Streeter is hired by the scheming woman he nailed for insurance fraud to go after her dead boyfriend’s stash of drug money… and has to single-handedly face off against a greedy, violent pack of lowlifes and sociopaths killing their way to the big score.

A LONG REACH
“One of the best…an entertaining series building on the traditions of the hard-boiled genre just enough to have a hell of a lot of fun with them,” Thrilling Detective

A psychotic felon is released from prison on a technicality and vows to kill everyone he blames for his imprisonment…saving his defense attorney, Streeter’s ex-fiance, for last, taunting her with each gruesome death. Streeter is in a race-against-time to hunt down the vicious killer — but he can’t shake the feeling that his old lover is playing a deadly game of her own.

The Waterbed King of Denver hires Streeter to track down his missing nephew, Richie Moats, who has robbed the owner of a string of massage parlors of his weekly take and has gone on the run. The chase entangles Streeter in a drug smuggling scam that stretches from the back alleys of Mexico to the streets of the mile-high city.

TOTALLY DEAD
“Tough, authentic, and right on the money.” Robert B. Parker

Pizzeria owner Alphonse Lucci is a pussycat who likes to pretend that he’s as tough and deadly as the mobsters he romanticizes. But Streeter really is. So when a greedy, ruthless bad-ass tries to strong-arm Alphonse into selling his restaurant to nail down the last piece in a crooked land deal, Streeter steps in to protect the likeable old man…and gets sucked into a deadly scheme that could leave them both totally, and very gruesomely, dead.

“Studded with Elmore Leonard—like oddballs. And straight-ahead Streeter is at least on a par with those other one-namers—Parker and Hammer.” Kirkus Reviews


Reviews For The Complete Streeter: All Four Novels