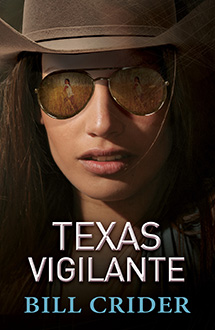 The powerful sequel to Outrage at Blanco

Six months ago, Ellie was a newlywed, working the dry land in 1880s Texas. Then the desperados came. They raped her and killed her husband, leaving her for dead.  But she hunted them down and, along the way, found an inner strength and relentless determination that no man can match. Ellie thought the killing was over…that she’d put her guns away for good to run a ranch that she’d inherited from a legendary Texas Ranger. She was wrong.

A prison wagon is on its way to Huntsville when one of the prisoners, ruthless killer Angel Ware, engineers a bold escape. Now free, and blaming his sister Sue for his arrest, Angel and a gang of three other escaped murderers track her and her family down to Ellie’s ranch. Angel and his gang mount a bloody attack and take Sue’s young child with them. There’s a posse on its way, but Ellie Taine isn’t going to wait. She saddles her horse and loads her guns, prepared to enforce the only justice she can rely on…her own.

The piano man has one rule: Don't get involved. Just play the songs. But can he live by that rule when he witnesses a horrific crime? And what price will he pay if he breaks it?

As clean and sharp as a fine Bowie knife. Crider’s prose slices through conventions and expectations