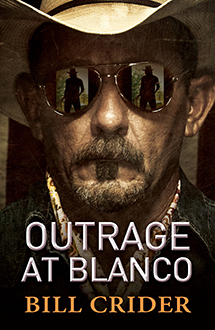 Outrage At Blanco by Bill Crider

On a bloody day in 1887, death came to Blanco, Texas. Before the sun went down, the livery stable was torched, an outlaw gang robbed the bank, two men were killed, and young newlywed Ellie Taine was raped. One of the dead was the man who planned the robbery – the son of dying, legendary Texas Ranger Jonathan Crossland – the other was Ellie’s husband, an innocent bystander.

Ellie is dead inside. She takes a gun and rides out after the desperadoes, cold-blooded and fearless, determined to kill the men who ruined her life. She’s joined by Jonathan Crossland, who only has days left to live… but would rather die in his saddle making amends for his son than rot in his bed. Together, Ellie and Jonathan set out on a mission of vengeance and justice, one that neither of them expects nor hopes to survive.

The piano man has one rule: Don't get involved. Just play the songs. But can he live by that rule when he witnesses a horrific crime? And what price will he pay if he breaks it?


Reviews For Outrage At Blanco

A tight plot filled with laconic charm and idiosyncratic characters

As clean and sharp as a fine Bowie knife. Crider’s prose slices through conventions and expectations