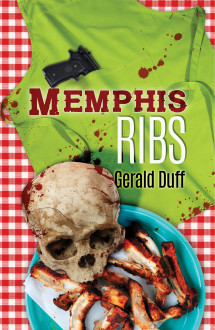 It’s May in Memphis, and four bloody murders occur on the eve of the International BBQ Contest and the Cotton Carnival: a conventioneer is stabbed at an ATM machine, a gang leader and his girlfriend are executed, and a wealthy local businessman is killed in his own home while his bodyguard is napping outside the door.  It’s up to homicide detective J.W. Ragsdale to solve these seemingly unconnected crimes without scaring away the tourists who are arriving in droves. That’s not going to be easy. Ragsdale’s investigation pits him against a crack-dealing gang in the midst of a bloody drug war, a Memphis BBQ king struggling to hold on to his crumbling empire, a shotgun-wielding assassin, an East Coast mobster with a taste for BBQ and the blues, and the newly crowned Maid of Cotton, who will do anything to keep her tiara.

Duff tells it with gusto and humor. And when it comes to describing the flavor of barbecue as well as the sights and sounds of a festival, Duff gives Calvin Trillin a run for his money. Duff's also got the local dialect and dialogue down cold.

Duff hits the jackpot...prose as laid back Southern as a hound dog napping under the porch. With J.W.'s wit keeping readers chuckling, Duff folds a vivid picture of the South into a solid well-plotted procedural. As sweet and satisfying as a barbecue dinner, without the fat

With his unerring ear for dialect, and his artful filleting of the Delta social order...Gerald Duff slow-roasts a tangy tale of murder, gang warfare, crack cocaine, and barbecue

Memphis Ribs has brutal killings, a street gang, a skydiving pig, a drug king wannabe and an amusing and interesting plot

Memphis Ribs captures the soul of this city. This book is not for the thin-skinned Memphis booster, the virgin-eared, or the politically correct…Memphis Ribs treats barbecue, the Delta blues, and the culture that created them with a certain irreverent awe that has defined much of what, in real life, still attracts tourists by the throngs

Memphis Ribs is so entertaining and suspenseful that one begins to wonder if Duff was ever part of the action. The prose is spare – no flowery descriptions of such subjects as the Delta or the Cotton Carnival. Instead, with a distinct ear for the colloquial and through a crisp narrative, Duff keeps the plot moving and the pages turning

Reminiscent of the best of Joe R. Lansdale and the late Elmore Leonard. Duff also effectively illustrates the very thin line that separates religion and barbecue in the minds of many southern U.S. natives. Along with the humor and insight, Duff includes no small amount of suspense as Ragsdale and Tyrone get closer to the main instigators of the crime and attempt to foil their grand scheme without losing their lives along the way. And if all this weren’t enough, it also succeeds in something few novels do: it will make you hungry for a huge slab of ribs grilled slow and low, or for the biggest sandwich of sauced pulled pork you can get your hands around. All of these combine to make MEMPHIS RIBS a crime fiction entrée well worth ordering up

Expert plotting, pitch-perfect dialect and sparkling dialogue…I can’t think of anyone else who has blended to perfection such a marinade of satiric humor and an expertly crafted police procedural…a completely entertaining novel

I loved Memphis Ribs. Duff is a Southern Elmore Leonard, only he’s a lot funnier.

Memphis Ribs is a wonderful tale, by turns suspenseful and explosively hilarious. Gerald Duff has a great ear for dialect and a wickedly accurate knowledge of the Delta social system

Here’s a novel that will either stick to your ribs or stick to your craw. Duff leaves few stones unturned in dissing Bluff City society. The novel is like sampling the city’s many versions of ribs and barbecue platters

They say blood runs thicker than water. True enough. But barbecue sauce runs thicker than blood. That's the premise behind "Memphis Ribs." This is literary fiction masquerading as a police procedural. There's plenty of pork shoulder to go around...and laugh-out-loud humor. It makes for a diverting read. I give it 12 ribs and a side of baked beans